Delray Beach is a coastal city in Palm Beach County. As of the 2010 census, the city had a total population of 60,522. The population was estimated at 65,055 in 2014. In earlier years downtown Delray was centered along Atlantic Avenue as far west as Swinton Avenue and as far east as the intracoastal waterway. Downtown has since expanded. By 2010, downtown extended west to I-95 and east as the Atlantic Ocean; The north-south boundaries extend roughly two blocks north and south of Atlantic Avenue. 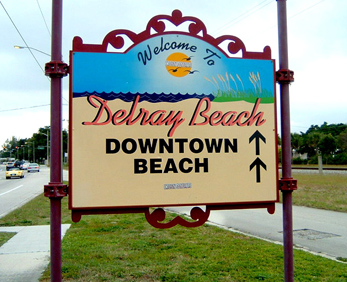